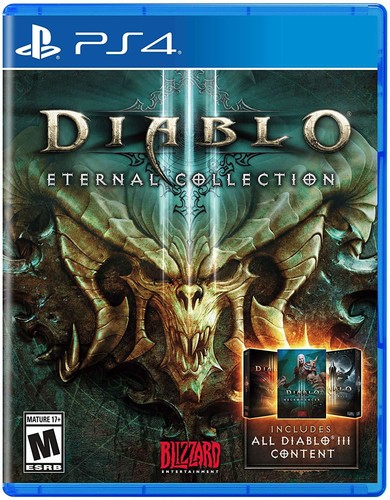 Signs of the end times draw powerful heroes from all over Sanctuary to rise up and defeat an evil reborn  The Diablo III: Eternal Collection is an unparalleled action role-playing experience and contains Diablo III, the Reaper of Souls expansion set, and the Necromancer class together in one definitive volume.  Rise as one of humanity's last defenders -Crusader, Barbarian, Witch Doctor, Demon Hunter, Monk, Wizard, or Necromancer-and level up with devastating powers and legendary loot.  Play solo or form a party of up to four other heroes, either with local players together on the same screen or online via PlayStation Network / XBOX Live  Lay waste to legions of evil throughout all five acts of the Diablo III storyline, or explore the open world in Adventure Mode to hunt bounties on the elder evils that lurk throughout the mortal realms.  Take part in seasonal events and earn exclusive rewards including armor sets, companion pets, and other fiendishly cool goodies.