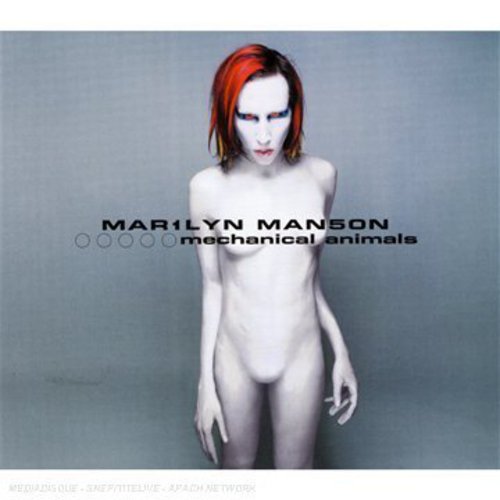 Fame Is the Inevitable Result of Subversion and Acclaim - Marilyn Manson Now Returns with His Most Alluring Rock & Roll Album to Date. Destined to Infiltrate Our Ideologies and Evoke Our Passions, Prepare for a Striking of the Senses. 1st Single/Video: "The Dope Show." Other Tracks Include "The Great Big White World," "Mechanical Animals," "Rock Is Dead," "I Don't Like the Drugs (But the Drugs Like Me)," "User Friendly" and More. Extensive National Tour Beginning Oct.

''Mechanical Animals'' is Marilyn Manson's third full-length album, released on September 15, 1998, by Interscope Records. This album marked a glam rock phase for the band, in contrast to earlier eras.

Initial sales were extremely strong but overtime it came under fire as controversy surrounding the album and the band increased, culminating in the aftermath of the Columbine shootings of 1999 (despite the lack of evidence that the shooters were fans of the band), with unit sales halting very close behind the figure for its predecessor, ''Antichrist Superstar.''

The album is a concept album, similar to its predecessor, ''Antichrist Superstar''. This album is considered a prequel to its predecessor. It debuted at No.1 in its first week of sale, and was the first Marilyn Manson album to do so. Four singles were released off the album: "The Dope Show", "I Don't Like the Drugs (But the Drugs Like Me)", "Rock is Dead", and "Coma White". - Wikipedia