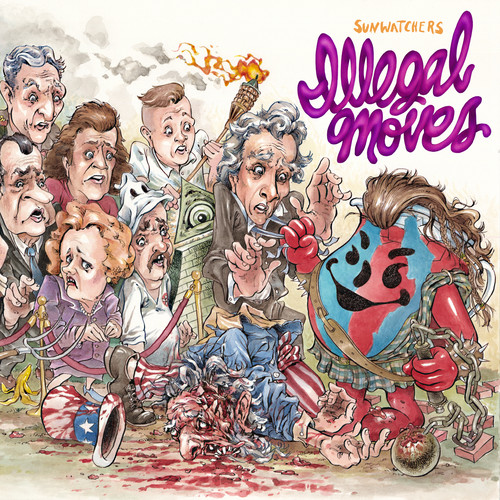 New York quartet Sunwatchers drew a line in the sand with their last album "II", a powerful statement of the band's unique brand of spiritual, free-rock, gonzo attitude and a progressive socio-political worldview. "Illegal Moves" is their second album for Trouble In Mind. "Illegal Moves" is the band's most potent blend yet; a heady potion of free-jazz, psychedelia, punk & noise rock that is both tender and ferocious; the perfect soundtrack to smash capitalism and fix our broken system thru sonic catharsis and revolution. Songs like "Everybody Play" and "Beautiful Crystals" insinuate themselves into your brain with the rubbery synchronicity of bassist Peter Kerlin and drummer Jason Robira. Elsewhere "New Dad Blues" and "Greeneyed Pigmen (Get The Blade)" sting with a righteous fury beyond the piercing scree of guitarist Jim McHugh's electric phin or Jeff Tobias' saxophone skronks, and the band's cover of Alice Coltrane's "Ptah, the El Daoud" transforms her meditative elegy into a fiery protest march. The songs crackle with an energy informed by passionate disgust of the status quo realized on the album cover's illustration of the Kool-Aid Man battling the personifications of evil from across the world. A psychedelicized avatar for the general wrath and action that they believe in."