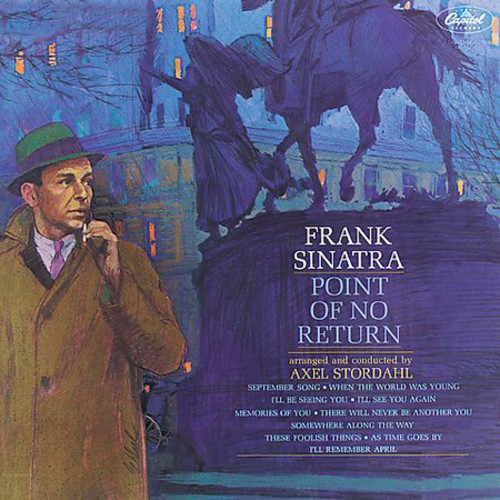 Frank's last album for Capitol reunited him with Axel Stordahl!

''Point of No Return'' is an album by American singer Frank Sinatra, released in 1962.

As the title reflects, the album contains Sinatra's final recorded songs with Capitol Records before permanently moving to his own Reprise Records label to achieve more artistic freedom with his recordings.

Indeed, he had already begun recording with Reprise as early as 1960 and had already recorded ''Ring-A-Ding-Ding'', ''I Remember Tommy'', and ''Sinatra Swings'' by the time these sessions occurred. He recorded this album in a hurried two-day session in September 1961 to fulfill his contract.

The album was still a special occasion, reuniting Sinatra with Axel Stordahl, the arranger and conductor who helped Sinatra rise to stardom in the 1940s. He also arranged the vocalist's first Capitol session back in 1953, so his presence gave a sense of closure to the Capitol era.

In an interesting side note, Sinatra recorded a different version of "I'll Be Seeing You" only months apart during the very same year on ''I Remember Tommy'' for Reprise. - Wikipedia