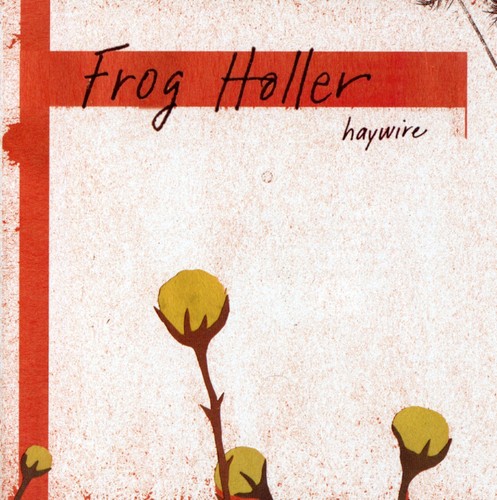 Reading, Pennsylvania's own alt country auteurs Frog Holler will be releasing HAYWIRE, their fifth full-length recording via the ZoBird Records imprint late Winter '06. HAYWIRE, the proper follow-up to 2003's RAILINGS was produced by Brian McTear (Matt Pond PA, Burning Brides, Mazarin) at Miner Street/Cycle Sound in Philadelphia with additional production by engineer, Amy Morrissey. HAYWIRE takes the conflict directly to the source, unlocking memories and questioning perceptions of the prices paid, the definitions made "Haywire," taking sides "Rat Race", 'truthing' lies "'74," and hoping for a last chance at getting it right "One Last Time." While Frog Holler's ethos has essentially remained the same, it was their approach to the recording process that differed this time around. " We knew we only had eleven days in the studio, so we wanted to delve into the songs before hand in a way we hadn't before", said Darren Schlappich, singer, acoustic guitarist and songwriter for Frog Holler. Schlappich, bassist Josh Sceurman, and drummer Daniel Bower spent tireless hours of pre-production cementing the arrangements and, in turn, gave way to a new found studio confidence that, with the help of McTear and Morrissey, would allow a more focused effort in capturing, not only a warm, natural sound, but the intangible qualities of Frog Holler to tape. Mike Lavdanski's soaring harmonies are pushed to the forefront and invoke a John Denver-like spirit as evidenced on "Gwendolyn Brown," while the band's tight, emotion-filled playing is as conflicted as ever pitting Todd Bartolo's bell-toned lap steel of "On Winter Blues" vs. Guitarist John Kilgore's space-echoed, freak out on "One Last Time." Schlappich wills the band to believe in itself on "Sight Unseen," pleading, "If I / told you / sight unseen / the future's bright / would you believe me?" and by song, and records end, it's obvious Frog Holler is a band in control and at the height of it's powers. . Schlappich and Lavdanski started Frog Holler along with original bassist Will Dennis as a bluegrass trio in June of 1996. The two had met through a vibrant scene of open mics in Berks County, Pennsylvania. Schlappich, a lifelong resident, and Lavdanski, a transplant from Southern California, found an immediate kinship in the simplicity and spontaneity of bluegrass music. Schlappich, a former athlete who played quarterback at the same high school as Oakland Raiders QB Kerry Collins and current Michigan starter Chad Henne, was making his first foray into music when he met up with Lavdanski, who "played his banjo like a guitar", and whose former group, the Kutztown-based jam-grass outfit, Saucony Creek Ramblers, had just broken up. Kilgore, a former band mate of Lavdanski's in SCR and front man in the epic, math rock outfit Mother's Favorite Hippie joined half a year later along with drummer Toby Martin. Kilgore was recruited because he played lap-steel guitar, but it was his defining guitar work and dissonant chords on Schlappich's straightforward original songs that laid the foundation of Frog Holler's shift from pure bluegrass to it's own unique brand of American rock music. After releasing their 19-song debut, COULDN'T GET ALONG (ZoBird Records) in early 1998, Dennis left the band, and was replaced by current bassist Sceurman. Sceurman, son of a storyteller from the neighboring Lehigh Valley, was raised around the burgeoning folk scene of the legendary venue, Godfrey Daniels, but also had a proclivity for Hendrix and hard rock, which he pursued throughout his early years in bands with his brother Neal. Frog Holler released ADAMS HOTEL ROAD (Record Cellar) in 1999 and IDIOTS in 2001 on the Philly indie label Record Cellar. It wasn't long before the band from rural PA was showing up on the pages of major publications like, the Washington Post, Philadelphia Inquirer, MOJO, and No Depression, as well as on the radio, appearing on NPR's "Here and Now", and New York DJ, Vin Scelsa's weekly, "Idiots Delight" program, of which the legendary host proclaimed, "one of the most memorable nights of music ever on ID!" Frog Holler records were also being played on specialty shows throughout the country, eventually landing them at #34 on the Americana charts. Their profile was also boosted by a "deliriously entertaining"(Village Voice), "killer"(No Depression), "live show to be reckoned with" that started dotting the map from Boston to North Carolina, New York City to Chicago, and anywhere in between including a 2002 tour of the Netherlands. After a long courtship and a role as a part.
This website uses cookies to personalize content and analyse traffic in order to offer you a better experience.
I accept Learn More
back to top