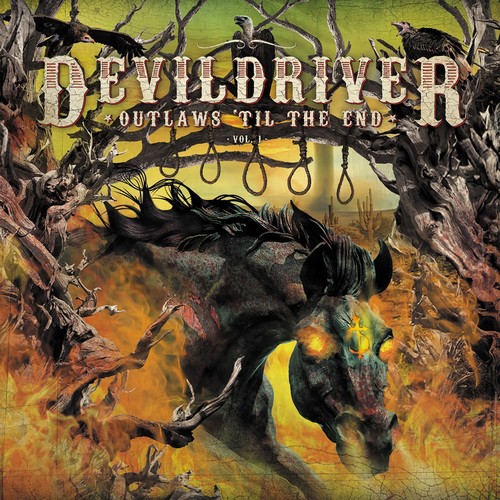 Going against the grain comes naturally for DevilDriver. The globally-renowned California Groove Machine have been a constant and effective force in the heavy metal world for the best part of two decades now. Thanks to widely lauded albums like 2005’s epoch-shredding The Fury Of Our Maker’s Hand, 2011’s ante-raising, ultra-brutal Beast and 2016’s acclaimed career peak Trust No One, the band led by vocalist Dez Fafara (ex-Coal Chamber) are firmly established as one of the most consistent and best loved bands in modern metal. But in 2018, expectations are about to be torched in the mother of all campfires! A monstrous collection of savage and slamming metal interpretations of Dez and his comrades’ favourite outlaw country songs, Outlaws ‘Til The End is both a startling curveball and a ferocious statement of individuality from a band with cojones to spare. “The blues and outlaw country are what made rock’n’roll. They were around before rock’n’roll...and in my head, I’ve always heard these songs heavy“, explains Dez. From the opening seconds of DevilDriver ‚sface-flaying version of Hank III’s ‘Country Heroes‘ (featuring the man himself on guest vocals) onwards, Outlaws ‘Til The End is simply one of the most vicious records the band have made yet. More importantly, these evocative, irresistible songs have all been wholly rebuilt from the ground up, powered by the classic DevilDriver sound and embellished with Dez’s unmistakable feral roar. Completing this unprecedented project is a host of metal and country luminaries providing unforgettable cameos: Wednesday 13, Brock Lindow (36 Crazyfists) Burton C. Bell (Fear Factory), Lee Ving (Fear), Randy Blythe and Mark Morton (Lamb Of God) and none other than John Cash Jr, son of Johnny Cash. The perfect marriage of badass country grit and neck-wrecking groove metal supremacy, it’s a pistol-packing game-changer delivered by true heavy metal outlaws.